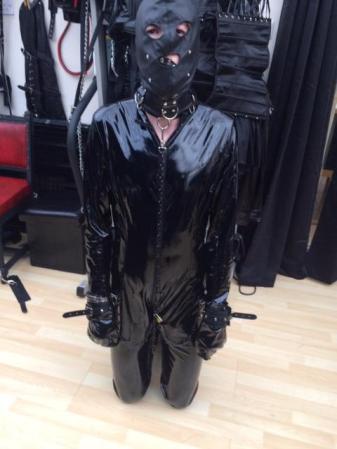 Slave stepped into the street, it was deathly quiet. He looked left to right and caught sight of another slave. It was like looking in a mirror. Black latex from head to foot, spiked posture collar around his neck clearly labelled stating who his mistress was and where he belonged. This is the world.

Slave walked the short distance to the food holding, he had strict instructions what to purchase, he knew if he failed he would be severely punished. Slave quickened his      Steps until he was walking in unison with the other slave but they both knew better than to acknowledge each other. This was the world.

Slave couldn’t remember how it had been before the pandemic had taken hold. He had vague recollections of being hoarded into huge barns along with other slaves. All were instructed to wear the same uniform, black latex bodysuit , gimp mask and leather spiked posture collar which was eventually labelled with his owners name. His own name, as with every slave, had long been forgotten. This is the world.

Slave had long since put all thoughts of his family and past life behind him. His comfort was every man had the same fate as he did. To serve their mistress, never to question, never to disobey. Life was to serve and he did it willingly. This is the world.

The pandemic had long since ceased to be a threat , but by this time all plans were implemented. Every mistress had her slave, the world was controlled by the female population. Every aspect of life was dictated by females. Slaves had been conditioned  to rely on guidance in every facet of life by their mistress. This is the world.

Population continued to flourish. Chastity was removed infrequently and when it was, slave knew it was his duty to procreate. He was permitted two attempts. If he failed then his chastity was welded on, never to be removed again. This is the world.

The plans had been successful. There was never any doubt that they would be. They had been orchestrated by the female population and now this is the world

One thought on “This is the world”