As they boarded the train slave was very surprised. Mistress pointed to the seat opposite hers. He sat down feeling puzzled. When ever they took the train to London she always made him stand in the corridor by the door. 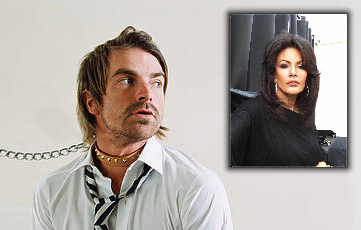 Sofia was wearing a black top and pencil skirt. The skirt was knee length and she also wore black stockings. She crossed her long legs and he caught a glimpse of her shiny suspender. Her leg gently rocked for a little while until her black patent stiletto was dangling from her foot.

Slave noticed the man sitting across the aisle, obviously mesmerised by his Mistress’s actions. He wasn’t at all surprised. Suddenly the shoe fell to the floor. That’s when she slowly lifted her leg and rested it on the seat between slave’s thighs. He knew this was his cue, and he gently began to massage her foot. Slave glanced up at her and she discretely pouted her lips at him. Knowing immediately the meaning, he bent and kissed her toes, then carried on gently massaging.

Slave noticed the man across the aisle still watching intently. He had picked up his newspaper and discretely placed it across his lap. Slave wanted to smile, but he knew better, although he was pleased in the knowledge the man opposite was jealous and he would have longed to swap places with him.

Sofia slipped her foot back into her shoe, and then presented slave with the other one, this time still wearing the shoe. She whispered quietly

“This one is a little marked slave, clean it”

Without any hesitation he bent down and licked the shoe clean. That’s when the man sitting across the aisle was able to see the black studded collar slave was wearing. He longed to ask questions, wanted to know how this man was in such an enviable position. He looked at Sofia and although he thought her beautiful, he was intimidated by her, and kept silent.

Sofia liked her slave to dress well on trips to London, he wore a very smart black Versace suit, a crisp white shirt, and shiny black polished shoes. The only give away sign was the leather collar around his neck, though he wore it with pride.

The train pulled into the station, as it did Sofia opened her bag and drew out an object. Slave wasn’t sure what it was. It was pink with diamantes in it. She held it for a moment, then dropped it, still holding onto one end. That’s when he realised it was a leash. This was something new, but he was so conditioned and so devoted to his Mistress, it was of no consequence if it was her wish. He leant forward and she clipped it onto his collar.

The man across the aisle was flushed and there were beads of sweat on his forehead. Sofia stood up and pulled on the leash. Slave stood up and followed her. As Sofia passed the man, slave couldn’t resist looking at him with a little triumphant smile.

Once off the train they walked along the platform. Slave being led by his Mistress. Although his face was flushed and he felt the humiliation deeply, he also felt a huge sense of pride in the knowledge that Mistress was making a public declaration of her ownership of him. This tall beautiful sophisticated woman was his Mistress, his owner, what more could he ask for.

Slave opened the taxi door for his Mistress. He knew by now it would be Harrods, Selfridges, one or two exclusive little boutiques that Mistress loved. He would be there to carry all the bags, accept all the stares, all the laughter, without complaint, he was happy to do it. He was also happy to pay for all his Mistress’s purchases. He considered it an honour and a privilege. When his Mistress had bought all she desired and he could barely carry more, they went to a little restaurant just off Soho that he knew his Mistress loved.

It wasn’t until they walked in that slave remembered to his dismay, the chairs were not particularly padded. The previous evening when he was preparing for today, he had polished his shoes, but unfortunately had left a little patch dull. It had not gone unnoticed by his Mistress. She was meticulous about everything. This had resulted in his being stripped and tied to the whipping bench. She caned him expertly, knowing exactly when to stop before splitting the skin, but still leaving him to bear the pain for some time. He was happy to take it.

Sofia picked up the menu. Slave knew she would order for both of them. He also knew she would order fish which he disliked, but it was of little consequence, just being in her presence was pleasure enough for him and he would have happily eaten a plate of worms. She ordered Sea Bass twiced, white wine, and tap water for him.

Slave didn’t enjoy his meal, but it was small recompense to pay to spend the time sitting opposite his Mistress. Even the stares from the other diners did not encroach on the moment for him. When lunch was over, slave paid the bill and Sofia dropped his leash to enable him to go outside and hale a cab. Stares, laughs, phones clicking at him no longer had any impact, he was exactly where he wanted to be. His life devoted to a wonderful Mistress who he worshipped and adored more than any one in the world, and if being humiliated and led around like a dog meant she was happy, then so was he.

The journey home was uneventful. His Mistress dozed most of the time, which meant slave had the opportunity to watch her sleep. Something he couldn’t do often. Once home, slave prepared a hot bath for Mistress and while she soaked he put away all her new clothes, taking special care with the shoes and boots she had chosen.

He dropped what he was doing and went into the bathroom.

He pulled it from the heated towel rail, and as she stood up and stepped out of the bath, he gently wrapped it around her, savouring every moment. This was the closest he would ever get to her, but, it was heaven.

One thought on “Sofia’s Trip To London With Slave”