The car stopped, slave got out and opened the door for his mistress . Sofia stepped out , she stopped for a moment and looked at him.

” I made a promise to mistress Matilda and I will keep it. Your mask will stay on , but don’t for a moment deem it a sign of weakness on my part. It is out of respect for mistress Matilda, is that clear?” Slave lowered his head. 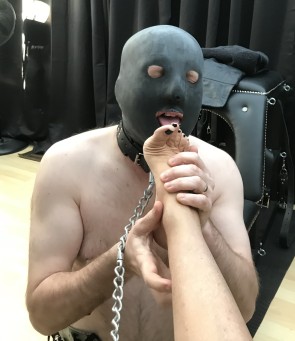 He opened the front door and stood aside , Sofia walked in and headed for the kitchen . She sat on the high kitchen stool and crossed her long shapely legs , she was aware of his eyes lingering on them and it irked her.

” Why are your eyes not cast down slave?”

“I’m sorry mistress,forgive me, you are so beautiful I forgot myself ”

He wasstill wearing the leather shorts he had worn during the auction and Sofia was very aware that he was erect. He cursed under his breath , he knew he was hard and the more he fought against it, the more his desire for his mistress grew.

sofias shoe slipped and was dangling from her foot, she began to slowly rock her leg . She was teasing him and he knew it.

” Get onto your knees slave ”

He dropped down in an instant . She offered her foot.

He held her foot up to his masked face and pushed his tongue out through the slit . He licked the shoe until it gleamed . He remembered her passion for beautiful designer red shoes and these were certainly no exception. Sofia offered him the other one and he did the same . Then she let the shoe drop to the floor . Slave was almost overcome and couldn’t contain the sharp intake of breath , it didn’t go unoticed .

“yes mistress, they are exquisite ”

“Then you may kiss them ”

He took one foot and pressed his lips against her soft toes , along the sole and over the bridge . His cock was so hard now he thought it would burst.

“Lick them now slave and massage them , they ache and need attention . He was in heaven . He caressed and licked them as if he were making love . Sofia felt disturbed and pulled away.

She was angry . She felt her full control slipping and needed to reaffirm her dominance . She placed her foot on his shoulder and pushed him hard . He fell back onto the floor and Sofia slipped off the stool . She put het foot back into het shoe and holding onto the breakfast bar , she stood , full weight onto his erect cock  making sure her sharp heel was in the middle oh his shaft . The pain was excruciating, he bit his lip until it bled and let out a groan

” Silence slave, you do yourself no favour , take your punishment without any utterance .In future  you would do well to curb your desire, do I make myself  clear slave ?”

” Yes mistress , I beg your forgiveness”

Sofia picked up a heavy chain from the bar , attached it to his collar and secured it to a fixture in the floor

Sofia turned and walked out. He looked around, it was the same kitchen he had spent his first night in four years ago . He wondered if she would eventually recognise him as the slave she had cruelly dismissed and what the consequences would be for him.He peeled down his shorts , the little black mark in the middle of his shaft was raised and angry and throbbed intensely

sofia unzipped her dress and let it fall to the floor , she stood in front of the mirror and smiled as she examined her tanned body. She slowly ran her fingers down her flat stomach, stopped at her panty line , she slipped her fingers down the front , toyed with the idea for a few seconds then pulled them out. No , she would not allow slave to arouse her , she would never make that mistake again. Tomorrow he would know who is in control in no uncertain terms

One thought on “Slaves first night”